By Rebecca TaylorMay 10, 2019News
No Comments 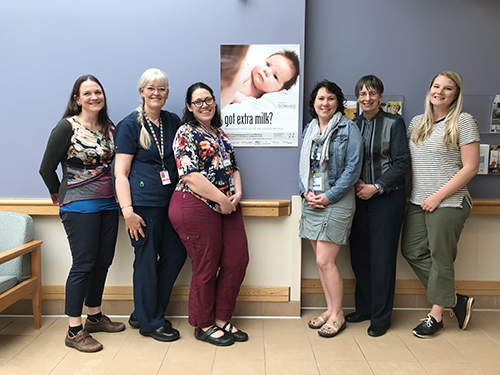 Nursing mothers in the Nanaimo area have a new resource to help support babies in need, by donating their milk.  Nanaimo Regional General Hospital (NRGH) has become an official Donor Milk Collection Depot for BC Women’s Provincial Milk Bank, located at BC Women’s Hospital & Health Centre in Vancouver.

A Donor Milk Collection Depot provides a space for women to drop off their raw, frozen breast milk, which is transported to the Provincial Milk Bank. The milk is then pasteurized and distributed to Neonatal Intensive Care Units across the province.

The Nanaimo & District Hospital Foundation is providing more than $13,000 in funding for the purchase of two medical freezers and a waterless milk warmer for the Breast Milk Depot at NRGH.

“We agreed to fund this project without hesitation as it is essential that all babies get the best start in life possible,” said Janice Perrino, CEO, Nanaimo & District Hospital Foundation. “We are delighted we can contribute to the establishment of the Breast Milk Depot at NRGH due to the support of our generous donors.”

Prior to the new Milk Depot, an order for milk had to be done for each individual baby in the NICU at NRGH. Now they will be able to make a single order that will supply milk for multiple babies. Plus, with the new freezers, a supply can be on-hand at all times with re-orders made as needed when supply is low.

New programs such as this require the input and support of many partners. The Nanaimo & District Hospital Foundation is delighted to be one of the partners along with NRGH, Island Health and BC Women’s Hospital Provincial Milk Bank.

“This new depot gives more women on Vancouver Island the opportunity to help fragile babies get the nutrients they need from breast milk,” says Leah Hollins, Island Health Board Chair. “Island Health is proud to provide this service at a second location.”

“Opening the NRGH Donor Milk Collection Depot is made possible through Unit leadership, support from the Hospital Foundation and interest from women in the community,” said Erin O’Sullivan, Island Health Perinatal Program Development Lead. “Promoting and protecting breastfeeding and breast milk as the optimal choice for infant nutrition is a key to supporting healthy moms and babes; especially, the tiniest babies.”

“We are so happy to have a place for Central Island women to drop off their milk once they are approved donors,” said Juanita Parsonage, Nurse Clinician, Neonatal Intensive Care Unit at Nanaimo Regional General Hospital. “This will give more women the opportunity to donate, making it easier for them and, in turn, the most fragile babies in the province will be able to access donor milk.”

BC Women’s Hospital launched the Provincial Milk Bank in 1974.  Since then it has processed more than 2-million ounces of milk, helping tens of thousands of babies across the province.

“BC Women’s rely on partnerships such as Island Health to provide donor milk to the sickest babies across BC,” says Frances Jones, BC Women’s Provincial Milk Bank coordinator. “We’re so pleased with the opening of the new depot, which will allow Nanaimo area moms to donate and further increases access to families in need.”

Donors must complete the Provincial Milk Bank’s pre-screening process before they can donate their milk at the Nanaimo Milk Depot at NRGH.  Screening consists of a brief telephone interview to confirm potential donors are in good health, not taking select medications and/or supplements, and willing to undergo blood testing.

The BC Women’s Hospital Provincial Milk Bank is looking for donors.  Women interested in becoming an approved breast milk donor can contact: 604-875-3743 or visit http://www.bcwomens.ca/our-services/labour-birth-post-birth-care/milk-bank/donating-milk

Bottom Photo: One of the Milk Depot Freezers 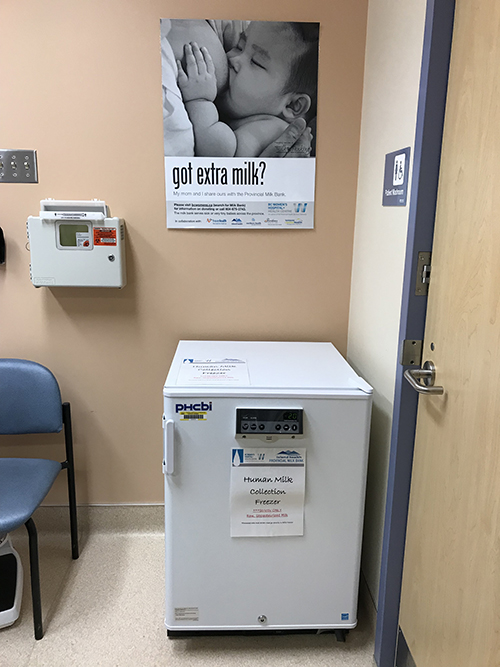 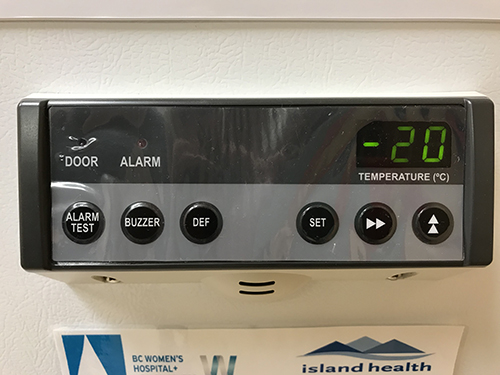